Battle your way through a procedural dungeon of enemies using your trusty spike and shurikens. Bees will try to stomp you, bats will try to spit blood at you, bosses will spawn enemies and shoot at you.

LMB to Throw Spike, RMB to Retract it

Double Jump to Fire Shurikens towards your Mouse

E to Interact with Chests, Pipes, and any other items.

Can also be used to block incoming bullets, a very good strategy for defense, especially as you get better

BOUNCE RELOAD - Bounce your Spike on anything to recharge Shurikens

WARNING: This game isn't for the faint of heart, but it is beatable!

Cool little mechanic. Especially the option to contract the spike ball only partially. Combined with the bounce of walls this allows for some sneaky attacks from behind cover. I would have liked the shurikens to be designated to a key instead of the double jump. I ended up just using them on accident because I just wanted to gain some extra height. A continue option in the pause menu would have been nice as well!

The bouncing ball and destructible terrain reminded me a lot of brick breaker. Maybe a little more intentional design to allow for cool chain destruction.

I love the game, but the spike moves a little too slow. but other than that it's a very fun game.

I love it (probably because I also enjoy games with physics based maces like yours). Had some bugs though, like my mace got stuck once when trying to restart.

Overall very well done though - graphics fit together, effects are nice, and even some deeper game play elements with the upgrades. Nicely done!

The music is nice (even if a bit repetitive in the long run), the sound effects are too, and the visuals are simple yet clear to understand. The enemy bullets especially are well contrasted
I like the fact that you balanced the shurikens (pretty powerful) around your own capacity to hit the enemies' bullets.

The Spike mechanic is pretty interesting, I thought at the start that it might be "one press of RMB will bring it back entirely) but the control that your method gives is nice too.

It looks like the enemies can get multi-hit by the Spike, which is a good thing, but I feel like I got multi-hit on my end too (it might be me missing a hit though, I don't know for sure). Maybe more invincibility frames could help with that?

The level diversity is quite nice, especially with the breakable environment. I feel like maybe more levels could've been possible especially since you have a pretty large grid-based area at your disposal, but with the enemy diversity it doesn't feel repetitive anyway.

Nice of you to put the player in a "training" zone when they start the game for the first time, it's a very good touch that not everybody would've thought about.

Beware of two small things: The font makes it look like it's written "PPE" instead of "PIPE", and the chest (and power-up) can be pushed too easily so I accidentally pressed E and went into the pipe instead of collecting the power-up several times.

The impossibility to pause the game without leaving the current level is to me the biggest problem right now, otherwise, very good game overall, especially for something done in only one day.

I feel like that was everything, sorry if that was too much to read.
Congrats on your submission to both of you!

pretty cool game  I like it. Great sound effects too! 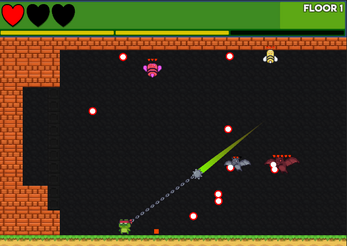 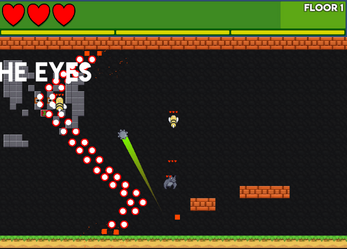